Tosai Or Tose: Which One Is The Correct Spelling? 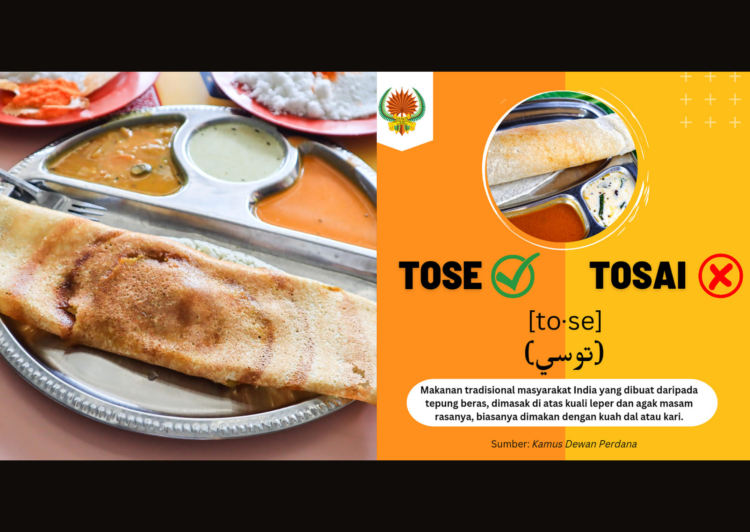 All this while, we spelt tosai wrongly?

A recent post by Dewan Bahasa dan Pustaka Malaysia (DBP) has caused a huge debate among netizens on how to correctly spell the famous Indian dish in the Malay language. Taking to their official social media account, DBP announced the correct spelling of Indian traditional dish is ‘TOSE’ instead of ‘TOSAI’ in the Malay language.

Thosai is a popular breakfast which is made of fermented lentils and rice flour on a griddle and is served with delicious chutneys and curries.

However, many users were not in favour of the spelling as shared by DBP.

A Twitter user said, “If you don’t know how to spell or pronounce ask us”.

Another user emphasised that this dish is an Indian origin “Therefore, pronounce it aas how we Indians want it said,” and added “Don’t redefine things to suit your agenda. Don’t start unnecessary issues,”

Meanwhile, another Twitter user said, “The kamus should be updated to reflect how people use the language, not the other way round.” while highlighting that Dewan Bahasa sometimes forgets that language is determined by the living.

On other hand, few netizens have an opposite opinion about this ongoing issue.

They said that DBP was standardising the spelling and that the term “TOSE” had been changed to fit the usual Bahasa Melayu spelling system, in which words are frequently spelt phonetically.

One of the users emphasized “The spelling is like how we say it. It has been standardised to follow Bahasa Melayu orthography, not other languages or informal Malay,”

To give a clear picture of this spelling change, Sanjay Vasanthanathan shared a video on his Facebook page. He said “TOSE is spelt right in the Malay language” adding that we are not aware of this spelling despite its existence for many years.

Let me ask you, is it Tosai or Tose? Share with us your opinion.

Tosai Or Tose: Which One Is The Correct Spelling?